Movies have been a great source of entertainment for decades. Drama is one of the most popular and loved genres because good drama movies can stay with you long after the end credits have rolled.

This short list of Hollywood films represents, in my opinion, the best of drama. If you haven’t watched any of these movies yet, set aside a weekend and treat yourself to some world-class entertainment!

A census taker once tried to test me. I ate his liver with some fava beans and a nice chianti. 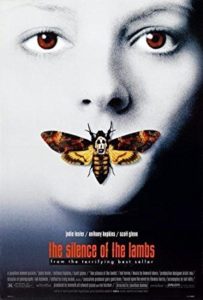 Jodie Foster plays FBI trainee Clarice Starling in this iconic crime drama and Anthony Hopkins plays the infamous Hannibal Lecter. Starling is given an assignment to interview Dr. Lecter, a former psychiatrist and cannibalistic serial killer who has been imprisoned at the Baltimore State Hospital for the Criminally Insane. She engages with Dr. Lecter in the hopes of catching a serial killer called ‘Buffalo Bill’ (a horrific combination of three real-life serial killers including Ted Bundy) whose modus operandi is to skin his female victims’ corpses.

The Silence of the Lambs is a disturbing thriller/drama that may not be for everyone, but it is worth watching for the intense plot and the award-winning performances of Foster as an ambitious FBI trainee and Hopkins as an unnerving serial killer.

Trivia: When Anthony Hopkins first heard the title, he assumed it was going to be a children’s movie! (As you can probably tell, The Silence of the Lambs is definitely not for kids.)

My momma always said, “Life was like a box of chocolates. You never know what you’re gonna get.” 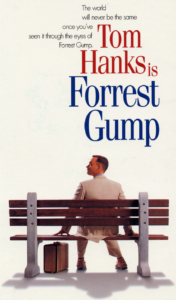 Forrest Gump — based on a novel of the same name by Winston Groom — is one of those classic comedy/drama that almost every Hollywood movie buff has seen and loved. It is the story of a good natured but unintelligent man called Forrest Gump who unwittingly witnesses and even sparks some iconic moments in history. He serves the US Army during the Vietnam war, becomes an international ping-pong champion, builds a huge shrimping business, and more. All the while, Jenny Curan, Gump’s only childhood friend and the love of his life, keeps slipping away from him.

Tom Hanks as Forrest Gump is so endearing, your heart breaks for his naivety and kindness. The solid performances delivered by Robin Wright, Sally Field and Gary Sinise make this film a real winner.

Trivia: In one scene, Forrest Gump guilelessly refers to Apple Computer as “some kinda fruit company.”

It’s easier to steal what you want than it is to earn it. 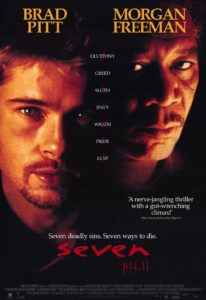 Seven, also stylised as Se7en, earned a lot of praise for Pitt and Freeman’s commendable performances, the gory special effects and the well-constructed plot. The film won Best Movie at the 1996 MTV Movie Awards, along with two other awards. The gruesome nature of the killings, the unlikely yet fantastic duo of Mills and Somerset, and the unexpected ending make for a thrilling must-watch for anyone that loves the crime genre.

Trivia: Denzel Washington was offered the role of David Mills, but he refused on the grounds that the film was too “dark and evil.”

It’s only after we’ve lost everything that we’re free to do anything. 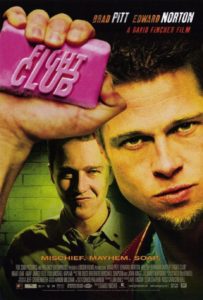 Yes, I know what the first rule of Fight Club is. But one can’t make a list of must watch movies and not mention this cult classic. Brad Pitt, Edward Norton, Helena Bonham Carter and Jared Leto are some of the actors starring in this movie adaptation of the book by Chuck Palahniuk. The unnamed narrator (Edward Norton) is an insomniac office worker who has a chance encounter with non-conformist soap-maker, Tyler Durden (Brad Pitt). Together, they form an underground fight club that changes everything.

This movie is dark, gritty and disturbing, so it’s not for a sensitive audience. Some critics strongly disapproved of the questionable behaviour of the characters in the film, citing the risk of ‘copycat viewers’. But if you can handle the nihilism and the violence, Fight Club is worth watching as it will make you question everything you think you know about society.

Trivia: Brad Pitt tried to convince his parents not to watch this movie. 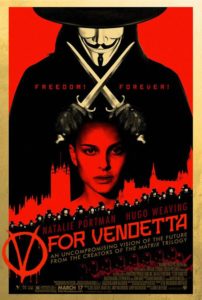 This movie is based on the graphic novel by Alan Moore and David Llyod, also titled V for Vendetta. Set in 2028, in a world ravaged by war and disease, Britain has come under the rule of a fascist police state. One night, Evey Hammond (Natalie Portman) is out past curfew and is cornered by the police. A masked figure who goes only by the name ‘V’ rescues her and saves her life. After this incident, Evey finds herself caught up in V’s destructive campaign against the totalitarian regime.

V for Vendetta is a bold movie with controversial themes that rendered it a cult favourite. The plot forces you to think about power, conformity to government, and where our world is heading. Plus, this thought provoking film delivered an ending that is sure to give you goosebumps.

Trivia: In the film, V is a romantic freedom fighter who cares about the loss of innocent lives. However, V’s personality is starkly different in the graphic novel; he is unmerciful and ready to kill anyone who dares to stop him.

WHAT IS THE REALITY BEHIND “LOVE AT FIRST SIGHT”