All The Things You Don’t Say: 10 Best Forbidden Love Quotes in Literature

Forbidden Love is easily the juiciest of the lot. Not only is it excruciating if unrequited, but also treacherous and exhilarating. It comes with an unmatched adrenaline rush, and drives us crazy with its countless possibilities and what ifs. As the saying goes, forbidden love is like a poisoned fruit – sweet at first but fatal down the road. No wonder it is such a common topic in popular culture.

If you currently are in forbidden love, have been in the past, or know someone else who is, here are 10 quotes from literature that bring the feeling alive: 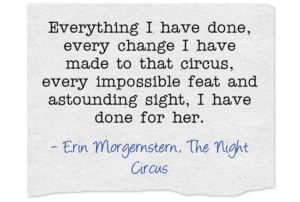 Everything I have done, every change I have made to that circus, every impossible feat and astounding sight, I have done for her.

Marco Alistair says this about his lover and rival Celia Bowen, making our heart squeeze with the desperation in his tone. The two lovers are stuck like pawns on the opposite ends of a lifelong game that can only end with death. They have been made to create an enchanted circus and manipulate the lives of hundreds of people. But they cannot stop. Because every single attraction within their
magical campus is a secret love letter to each other. And the day they
stop, the game ends. Their love dissipates. And one of them dies.

9. The Palace of Illusions 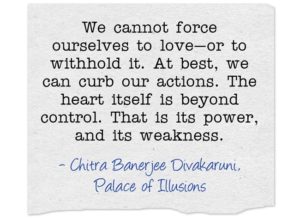 We cannot force ourselves to love—or to withhold it. At best, we can curb our actions. The heart itself is beyond control. That is its power, and its weakness.

The attraction between Panchaali and Karna is electric in this retelling of The Mahabharata. The fact that the two hardly interact throughout the book will make your heart ache for them even more. Every time there is a mention of the scandalous bond between them — even if it is as brief as the two coincidentally appearing in white clothes and exchanging a wordless look — you will grab the book just a little bit tighter. As far as forbidden love is
concerned, it rarely gets better than this one.

This is a fairy tale with teeth and claws.

A simple sentence perfectly capturing every essence of forbidden love. Whether the book itself is about love at all is highly debatable, but the quote deserves a place on this list. After all, isn’t every forbidden love story a seeming fairy tale that ultimately leaves us shattered and destroyed? 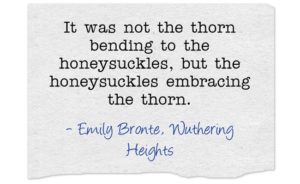 There’s a reason Wuthering Heights is such a celebrated classic. Catherine and Heathcliffe’s love is passionate and overwhelming; quite shocking in fact for Victorian times. Among the dozens of marvelous quotes in this book, this one hits the nail absolutely on the head. No forbidden love ever is a warm morning after a shivering night. Rather, it is a slice of dusk with impending darkness, and learning to find the sun among the stars. 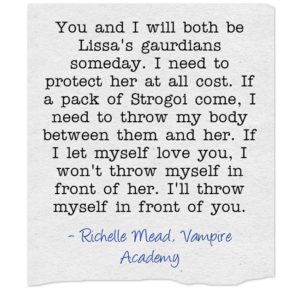 This quote easily takes the prize for being the cutest of the lot. It is straightforward, authentic and honest. It is loaded with the helpless factor that makes forbidden love so desirable and is a young adult favourite. Way to go, Dimitri Belikov! Not only are you irresistibly hot, but you also know exactly how it’s done. 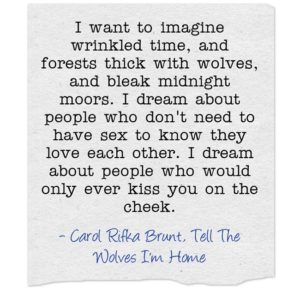 When I was fourteen, my mother once told me: “Someone who truly loves you will never want to touch you.” While that was a poorly worded sentence, I get what she meant and have lived by it ever since. In fact, forbidden love does not always come equipped with sexual feelings, which is what makes it so confusing. In this book, June Elbus utters these words about her own uncle. But it is the innocence
of the thought that drives this quote home.

4. Gone With The Wind

You should be kissed, by someone who knows how.

Seriously though. Is there anything better than Gone With The Wind? This legendary line is by Rhett Butler, to the widowed belle Scarlett O’Hara. It is something that could have been uttered only by him, and it makes me go weak in the knees to this day. It gets even better when you consider not only the literal meaning of the sentence but also the metaphorical one: You need to be put in your place, by someone who has
the capability to tame the tornado that you are.
*swoon* 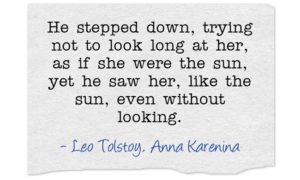 He stepped down, trying not to look long at her, as if she were the sun, yet he saw her, like the sun, even without looking.

This is that kind of quote which expresses what you can’t find words to say. I cannot explicitly explain it, because if I could explain this feeling I would have come up with the quote myself. Yet, you understand it perfectly, don’t you? Just like I do. We’ve all felt like this at some point. I believe Leo Tolstoy is magic. And this particular quote is the proof of that. 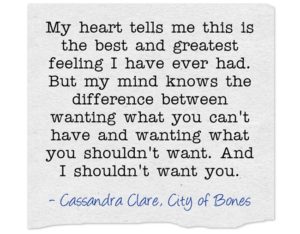 I’ll be honest. I’ve never read The Mortal Instruments. Up until a few weeks ago, I didn’t even know the context of this quote. And yet, I’ve carried it around with me for months, saved it up carefully in my phone memo. That’s how good this one is. I love it so much, especially because it expertly plays with the words can’t and shouldn’t. These are two words so easily interchangeable, and yet they can completely alter the nature of the feeling they’re trying
to express. I wish more authors played with these words in the context
of forbidden love. But then, if they did, Cassandra Clare wouldn’t be #2
on my list.

I love you as certain dark things are to be loved, in secret, between the shadow and the soul.

Pablo Neruda is everything. It should therefore be no surprise that he bags the top spot on my list. This quote strongly appeals to the little goth girl within me. It is so hooking and leaves you with so many questions. Who is it about? Is it the person who is dark, or the feeling itself? What happens next? I so wish this quote
was in a novel. That way, I’d know.

Rupkatha Basu is a fiction writer. She publishes short stories on Wattpad in her free time and runs a literary blog. At present, she is working on her first novel, while pursuing content writing on the side.

How to Build a Healthy Relationship

I can’t even tell you how much I love this.